Novel construction method that permits all folios to be used as joined spreads. Fully described and illustrated at http://www.sketching.cc/forum3/viewtopi ... 736#p20736 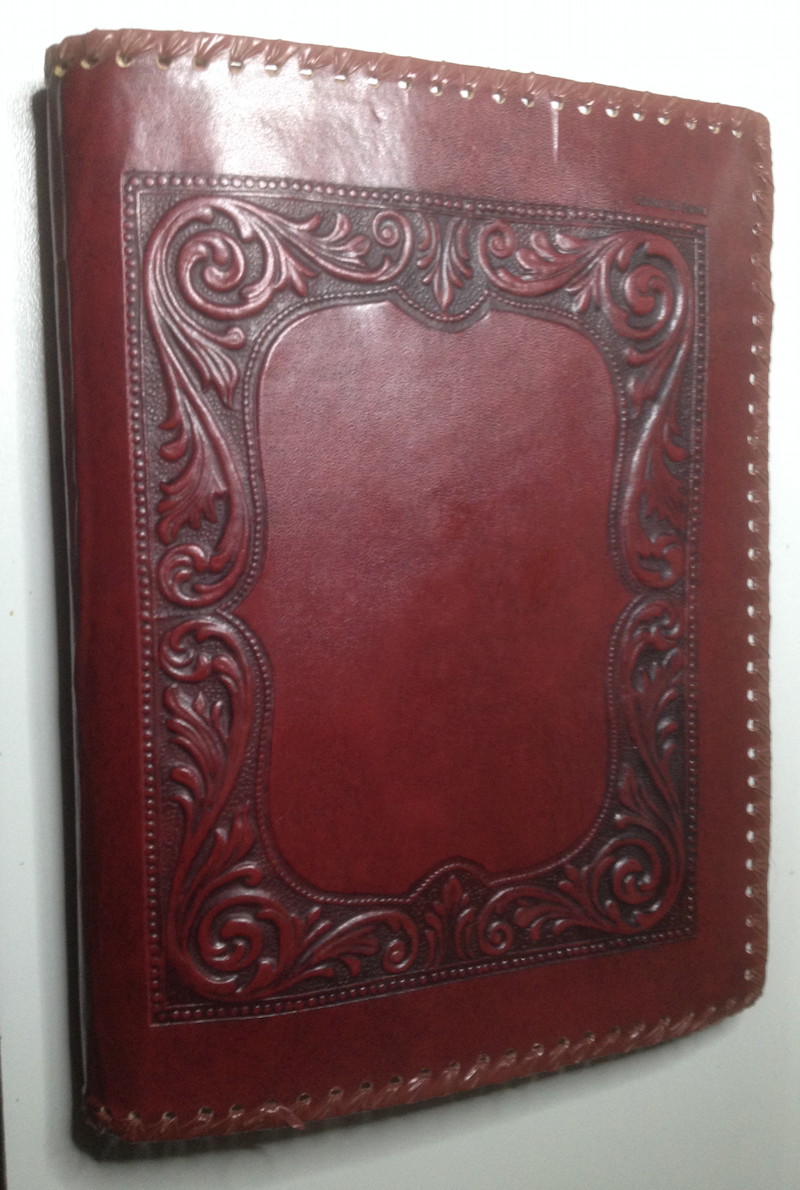 Where did you find this fantastic leather cover coach??
https://www.marialenasarris.com/
Top

Alitogata wrote:Where did you find this fantastic leather cover coach??

It's a telephone book cover I've repurposed. My first construction, inside thin card covers â€” chosen for weight control â€” that I'd painted for precisely this purpose, worked well enough to prove the principle of my design, but not smoothly enough to be entirely sensuous; the slight nap of craft card interfered very little but I like things I handle to feel perfect and operate very precisely and smoothly. The silk lining of the telephone book cover adds just enough slipperiness to make the whole thing operate like a perfect mechanism, settling to exactly the right position whether closed or open without any input from the artist.

If I had any gloss card to hand in the middle of the night when I made the first working model, I probably wouldn't have used the leather cover... I originally conceived of the whole thing as very modern in appearance because of the novel construction method. But now that the leather cover has proved so useful, and beautiful, it adds a layer of tactile pleasure to an already worthwhile project.
Andre Jute
• Facebook • Netsite • Publisher •
Top

Look what the owners of my neighbourhoodâ€™s tobacco kiosk kept for me:

Nine perfect large tin cigar boxes. Similar to the one I used to make my little sketch kit ( but larger size)


As you understand now I'm going to turn them into sketch kits exactly like mine. But first I have to gather, or find an alternative of the mini sd card plastic cases to stick them on their lids. ( that will be the most difficult part. I'll have to ask each and everyone I know to find and give me these cases- I want to believe that they haven't throw them away).

This time I'll make them a little more professionally and I'll use probably red enamel spray paint for the outside and white for the inside ( and I'll repaint my sketch box too).
What about adding the forum's logo on their lid??
https://www.marialenasarris.com/
Top

Those tins look like the business. I have one waiting for me to decide the palette inside. I've painted it white inside and out.

The shadow is me leaning over it to photograph the tin, not bad spraycan practice! Now that you've come up with the idea of the forum logotype on the outside of your box, perhaps I'll paint some fake icon or tiny corner of a Brueghel scene on the cover of my box in acrylics, which should dry fast enough and be durable enough. 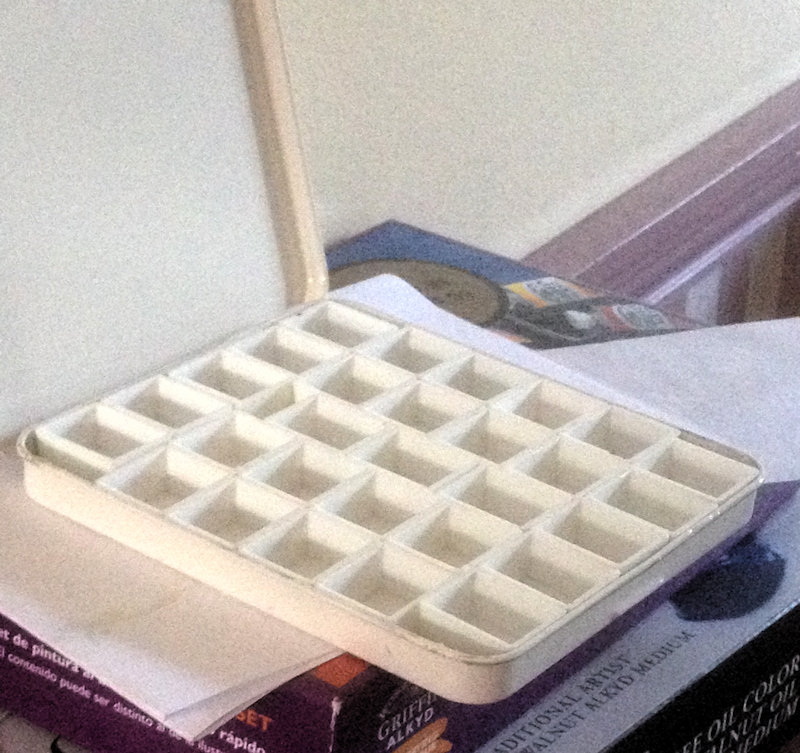 It'll hold 29 half pans. I don't actually need 29 colors, so I may replace some of the half pans with whole pans of the most frequently used colors, the convenience greens, yellows, burnt sienna, ultramarine blue. Especially as my wife, whose glue gun I'll borrow to fix the pans, once they're filled, in the shallow tray, says gettting the pans out again may not be as easy as I expect. I considered the alternative of Pritt glue dots but there is no height to spare, the top edges of the halfpans just touching the lid when it is closed. But the hot glue will flow on the floor of the box and fill the angles between the sides of the pans and hold them by that. I hope.

This new paintbox is intended for studio use as I already have smaller ones for plein air work. In the photo above the 13-color bronze box in the foreground goes with sketchbooks in the A5 up to folded quarter imperial (closed size of book about 9x12 inches), the black enamelled Fome box sitting closed in the postcard pochade tin at the top of the photo is dedicated to it, and the little box for a 6-colour limited palette -- of which I have two -- has never actually been used because the Fome box, holding 12 colors, is small enough.

The new White Box studio palette is not intended to offer mixing space, though the lid is available; even in the studio I rarely mix colours except on the page, and I arrange tints on the page too by adding water or blotting. If more mixing space than the lid is required, I' have a beautiful china palette that will do the business handsomely.

PS. I think your black tin with the paint wearing through looks the business, Alitogata. Were mine, I'd leave it as the telltale of a working artist. Nothing marks an amateur so much as having all spanking brand new equipment and being frightened to use it for fear of leaving a mark on it.
Last edited by Andre Jute on Fri Mar 03, 2017 11:58 pm, edited 1 time in total.
Andre Jute
• Facebook • Netsite • Publisher •
Top

The all white box looks beautiful.

The cigar boxes they kept for me must be similar with this one. I think they hold about 28 half pans and different combinations of full and half pans.

Don't brake your nerves with hot glues and such things because you'll not be able to replace later on any pans or change them with full pans. Just glue magnet sheets ( promotional do the job) under your pans and then you can replace them whenever you like. ( don't you have any delivery restaurants there to fill you up with such promotional magnet card??

You don't have to fill the box with pans either. You can use it to carry other things in there. ( erasers, sharpeners, small pencils) . I keep in my small sketch box two small pencils with an eraser on their back when I want to have the super minimalistic kit with me. This box, a small sketchbook and a waterbrush and all these in a pocket and I'm ready to go.

I suppose that the larger boxes will be able to hold a load of things in there.

Well I figured out what to use on the lids of the boxes. By the time that these are larger, mini sd card cases are not needed at all. Only something to hold the lid flat is needed and this can be everything. Clothes" buttons, flat beads, even pebbles. ( quite stylish eh?? )

What I meant when I said that I want to paint my own box, was to paint it from the inside because the enamel white paint coat that has now, was done, back then when I made it, with a brush and is a little bit uneven. Not that bothers me that much but a new coat of paint will not harm.

I will not touch the outside because I'll have to remove the sticker and Agis will kill me if I ask him to give more of his stickers.

I decided to sadistically freak you out the last day of this year!!

Prang watercolour sets review and lightfastness test on my blog.

Super article about the Prang watercolors. Also the earlier linked article about chalk resist is great; I hate the obstructive liquid resist. Are you sure there's a place to comment on your blog? ( But it may be that Ghostery, my anti-spam thingy blocks a popup.)
Andre Jute
• Facebook • Netsite • Publisher •
Top

It is tragic what is happening with spam comments. They spoil any discussion attempt. I'm not surprised that I didn't have any comments on my blog posts.

Edit: Disqus doesn't pop up. But it runs a script and Ghostery cuts off scripts too. I use Disconnect that cuts of third party scripts too but mostly those from Facebook and such things. Disqus can't track you if you are not signed in with your account on it, but it has also the advantage that you can have a private account that doesn't allow others to track your comment history.
https://www.marialenasarris.com/
Top

Well ... I figured out what how to set up Disqus for not tracking the commenters. It has an opt out from tracking option, but they must have enabled the same option on their personal account. If they don't opt-out themselves then Disqus tracks their browser cookies, in other words it makes an exception on the rules I made on my web site.
I haven't enabled ads and such things on my web site as I don't want them. So it is, for the time being, ok to use it for commenting there. ( if I detect any ads I will remove it instantly).
https://www.marialenasarris.com/
Top

Seems I have much to learn. I have a backpack with my kit in it. Really don't need everything I throw in it. I guess I am just worried about not having what I need on hand.
Top

Moonshadowe wrote:Seems I have much to learn. I have a backpack with my kit in it. Really don't need everything I throw in it. I guess I am just worried about not having what I need on hand.

I got towards minimalism in time. I hold with me just the basics because I ended up to the conclusion that if I hold with me the whole of my studio, then I'm not going out for sketching but for en plein air painting something that I have to admit that I rarely do ( intentionally at least).
A sketchbook, a pencil, an eraser, some brushes ( mostly waterbrushes) and the paints. And plenty of paper towels.And that's all.

Portable sketching kit of W&N Calligraphy Inks, described at
http://www.sketching.cc/forum3/viewtopi ... 962#p21962
Also images and discussion of some of my special purpose brushes, including those I inherited that are now obsolete or near-obsolete, including a source for a modern copy of the rare and wonderful "rotary tree brush".
Andre Jute
• Facebook • Netsite • Publisher •
Top

Wow. That looks like a great kit. Have you tried your inks on Yuppo paper? It is a bit tricky to use it but gives brilliant but also a bit random results. Nice paper for inks too are the bristol plate surface ones. They have a very smooth satin surface and inks look great on this paper.
https://www.marialenasarris.com/
Top
Post Reply
324 posts