Hi Harry,
If I had to toss all but one of my pens, I would keep a particular vintage Sheaffer. Its broad gold nib does a fantastic job with line variety. I wrote about it here in the forum:
viewtopic.php?f=1&t=1819&start=30#p14823
There's a video demo there... Unfortunately, this new forum cannot play movies as the previous one did. (Matthew, can you add movie formats to our new forum?)

I posted in the last page of that discussion this sketch which demonstrates the line range:

It can make strokes from brush-like to ultra fine, and glides beautifully on paper. It's solid and reliable. I would never worry about it leaking during ordinary transport.

I wish I could say any of my other flex pens could be the ideal all purpose pen. Flex pens are so much fun! They give excellent variety. Each has its own personality. Yet, the right broad gold nib does such a good job, I have to vote for that vintage Sheaffer.

If you decide to look at vintage Sheaffers, I recommend testing them out to be sure you are getting the right nib grind for sketching.

If you decide to get an antique flex pen, which are the better flex fountain pens, each is unique. There is no one year or make that is assured to give the qualities you seek. Instead, it's the individual nib that will happen to win your favor. There's no way to know until you try each out.
Rebecca
Top

All the same, I wouldn't run around buying up old Sheaffers with the inlaid nib in the hope that one would be flexible. I remember as a student having a PFM III with a nib so stiff I played darts with it. Here's a PFM III (that's Sheaffer's Pen For Men III, they all had the same handmade and tuned nibs, the numbers are just levels of trim) that I've written with since I was a schoolboy that, surprisingly, has a 1:2 ratio of line width by putting no weight on it to start and then pressing quite hard. Since it starts at what today will probably be classed as extra-fine, the flex line isn't exactly broad but it is pleasingly darker than the zero-press line. However the Skrip ink I have in the pen is negligibly lightfast, and I have no intention of putting carbon ink in a precious vintage pen that has served me so long. 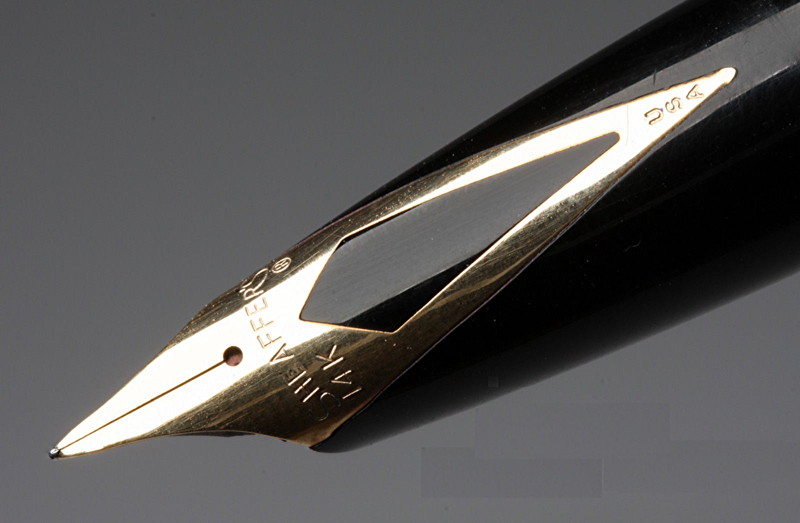 Pressing hard can't harm these Sheaffer inlaid nibs because they were, quite literally, designed to handle like a ballpoint, when ballpoints had just appeared, in the middle-1950s, and Sheaffer's bright idea was to design a nib for real men that would, exactly like a ballpoint, write through several sheets of paper and carbons.

I'm quite envious of Rebecca's clearly fabulously apt broad-nib Sheaffer, but I expect it would be a frustrating business to find one for myself.

***
In general, I am not enamoured of flex pens. I use a Platinum 3776 Century EF Soft, which does flex enough to have a modern reputation among sketchers, and it makes my handwriting seem nearly elegant, but on the whole I prefer Sailor's flip-nib fude fountain pen which has much greater variety of line widths from ultra-thin on the back of the nib to near enough a couple of millimetres thick on the flat part of the bent nib. The Sailor costs about a tenner from Rakuten, takes carbon ink, and you can get a converter for it if you don't want to use cartridges -- but cartridges are easily available from Japan.This is the Sailor:

There are also two cheaper desktop/drawing bag versions called Fude de Mannen CDE, which takes the same section (the bit with the nib) but in two angles. There's a small bit of learning with these fude nibs, because you make the line wider by tilting the pen rather than pressing harder, but most people get on well with them. Don't be tempted by the cheaper Chinese fude fountain pens: the Sailor has one lovable feature the Chinese pens don't have: the Sailor starts every time.
Last edited by Andre Jute on Wed Mar 06, 2019 1:56 am, edited 1 time in total.
Andre Jute
• Facebook • Netsite • Publisher •
Top

It seems my writing was vague about flex pens. I made it sound like the Sheaffer is a flex pen. It's not. The nib is just soft enough to mash down and spread the tines slightly, which makes the line juicier and a bit wider than the light pressure broad mark. Harry, make sure to read the discussion about it in that link I showed above. You will see Sheaffer broad nibs are not always great for drawing. I might have just gotten lucky.
Rebecca
Top

I went through a succession of Noodler's pens over several years. The are great sketching pens and inexpensive.The one I liked best was the Konrad. Its only drawback was having to fiddle with the nib and feed fairly often to keep it working right.
Eventually I invested in a Pilot Falcon Soft Extra-Fine, which was more costly but not out of sight. It's not as flexy as the Noodler's but has a very responsive and expressive line, and is very reliable and low maintenance. I carry it everywhere.
BTW, Goulet Pens, is a wonderful resource for pen lore and a great place to buy pens, ink, and related products. I have no vested interest - just a happy customer.
Matthew
matthewmattingly.com
Top
Post Reply
5 posts •Page 1 of 1