Are brush pens supposed to be washed before storing away?

I have a Kuretake No. 8 in my plein air bag, and several of the No.13 which uses the same soft nylon brush sitting in various other kits used in my studio or my study, also the big No.22, which uses a larger but otherwise similar brush. All of these sit with their the cartridge permanently fitted and even when I use them only every several months, or once every year or two, I just leave them sitting there with the cartridge fitted, capped of course, usually cap up, though the ink doesn't dry out or even leak when stored cap down or horizontally.

My logic is that unless the brush is really thoroughly cleaned of ink, especially in the parts you can't see, there is more danger of the tube at the rear of the brush and the passages clogging up when apart from the ink capsule with its ink which includes a flow agent.

I also have Nos. 40 and 50 which are genuine sable hair and those I clean with water when they are put away and refit the capsules of oil that it came with them to keep them soft.

Note that the heads on the Kuretake Nos. 13, 40, 50, such as I use, and the No. 15 which Russ has, and possibly others, are fully interchangeable BUT that the No. 8 head won't fit those because the mouldings for cap retention are different, and their heads won't fit the No. 8. The No. 22 head has the same thread as the Nos. 24 and 26 and the cartridge is the whole back of the pen, very economical with ink; note that its ink is also different, blacker and definitely lightfast; It is intended as a designer's pen rather than an artist's but the No. 22 also won't dry out; I use my No.22 for rougher or larger work and for fills. Once you have command of the No. 8, the next one you want to think about is the No.22, and then perhaps some of its gray or coloured cousins (I don't know their numbers because I use water colour or gouache instead).

Also, if you're a fan of the nano carbon inks from Sailor or Platinum or the chemical Bullet Proof Black from the States, don't even dream of the sable-head Kuretake Nos. 40 and 50 because they will clog up and be rendered useless. Platinum makes a sable version which can be used with their own nano ink, but I don't have one, so I can't tell you anything more about it. I have a Sailor fude fountain pen which can be fitted with a brush head in the place of the flip-tip nib, both of which can be used with Sailor's own nano ink, of which the black is lightfast but the others (a blue-black and a red, neither of which are worth writing home about) are of doubtful permanency; the Sailor brush is smaller though than the Kuretake No. 8, and probably more difficult to learn -- I haven't tried yet.

***
A tip about using the No. 8 and other brushes of this type, but the No. 8 especially as it is longer-stemmed than the others: forget about doing what Russ does, which is make thin and interestingly variable lines. It took him years to be that proficient with the brush. Instead, in the beginning regard the No. 8 as a thick stick of charcoal or graphite and just go for it, and leave it to time and practice gradually to refine your line. Here's the first drawing I made with my No. 13, the first one I bought, on the day it arrived: 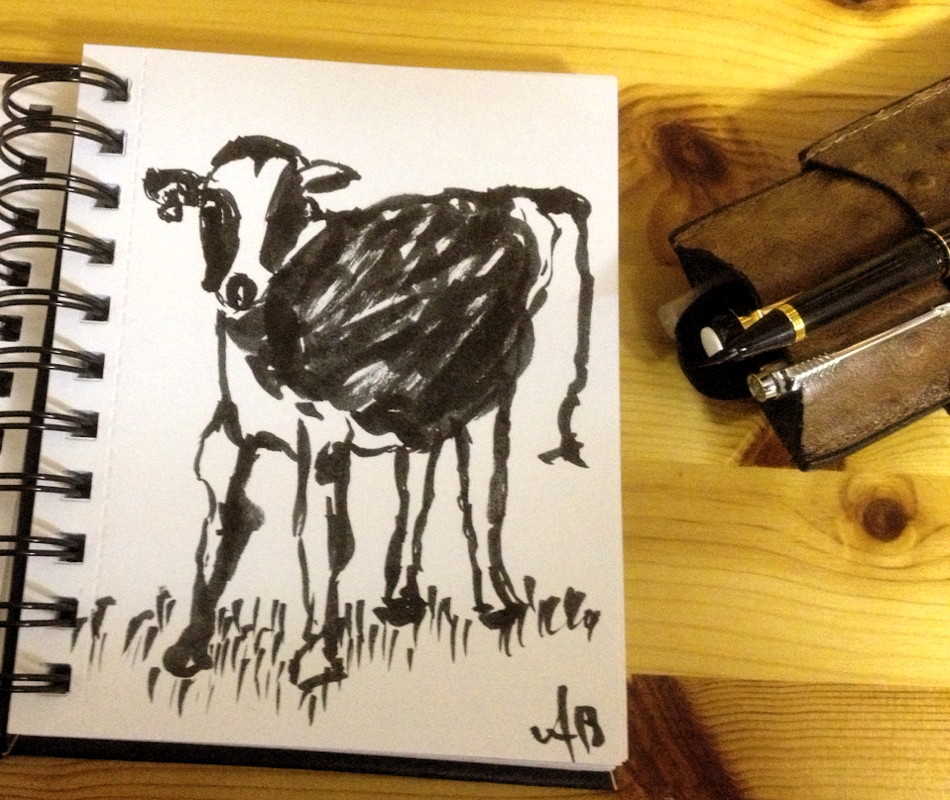 As you can see, a quick sketch before the calf decided I wasn't planning to eat it that day and turned away, nothing refined about it, but the No.13 is perfectly capable of laying down observation in the fleeting moment.

Here's another, made with the No.13 and the No. 22 and a Chinese flip-tip fude fountain pen for the gray: 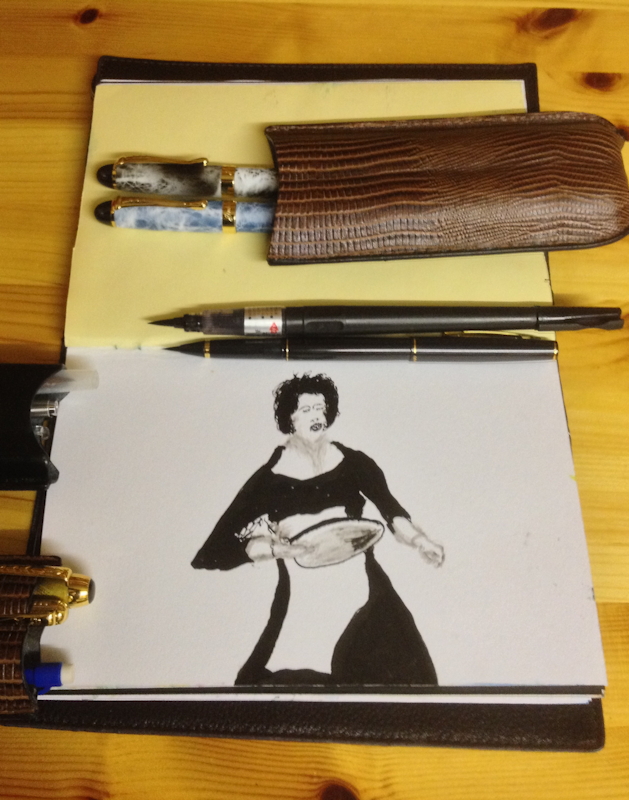 Don't be shy of using a fountain pen or a medium graphite or oil pencil (I like the Cretacolor oil pencils, a lot) for your finer lines while you're building up your brush skills.
Andre Jute
• Facebook • Netsite • Publisher •
Top

Thank'you Andre for your precious info!
My trouble with the brush is exactly achieving fine lines. Even when sketching, I like to use 0.5mm or less points, and to work at small size, but with a brush it seems like I'm forcing the medium to fit a style it's not meant for (at least without years and years of practice!).
It doesn't help that with a brush (and, probably, also a g-pen and other flexible nibs) I must constantly decide what line weight to use, even though I'm still having trouble seeing where to place the line itself...

"I must constantly decide what line weight to use, even though I'm still having trouble seeing where to place the line itself...

I know what you mean. Usually I just go for it and rub out or if the drawing is in ink trash the page. I've been an artist of one kind or another all my life and I'm very comfortable with trashing even years of work, never mind a quick sketch. But sometimes I get hung up on overthinking things. Once I was sitting on a bus sketching a woman and her baby in front of me. I was hovering and havering over a line. A fellow in the seat across the aisle was paying attention, his hand describing a curve in the air. I gave him the book and the pencil. Without letting the pencil touch the paper, he indicated the line. I gestured for him to go ahead and draw the line. It was so right, I told him to finish the drawing, which he did as rapidly as I write stuff. It turned out he was professional artist.

The key word is "overthinking". You have to draw a line sometime, so the sooner the better. And better to have a nearly-there line that you need to rub out than no line at all because you want to see the perfect line in your head before you draw anything.

I don't think you wasted your money on the Kuretake No. 8, but you're probably right to put it away for a bit until you gain the confidence to be wrong. Note that you can't put Indian ink in it; it has to be Kuretake's cartridges or Kuretake bottled ink for which you can use the Platinum converter.

An inexpensive fountain pen with an extra fine line that can use Platinum's own nano pigmented black is the Platinum Carbon Ink Pen, a desk pen which is longer than a normal fountain pen and an essential for everyone who draws in ink -- very common in artists' plain air kits.

***
D'you know that Russ makes his sketches in pencil, combines and arranges several sketches into one at home, and only then inks with his brush, presumably under good light at a firmly planted desk or table.

Platinum OLEeNU Shield (that's how it is spelt), cheapest of the lot, under five bucks, but the mechanism, intended to protect the lead from breaking (and to let you use almost all the lead, which in turn means supporting all the length of the lead), gives the pencil the flexibility an artist needs. Only available in 0.5mm. If you don't insist on stuff feeling and looking expensive in your hand, this is the best mechanical pencil for an artist, because of the mechanism and the beam of the pencil.

Pentel Orenz, thinnest line of the lot, available down to 0.2mm, not really an artist's pencil but if you insist on a line that thin it's your only choice. I kept mine because I sometimes do industrial design work for which such a pencil is essential. Not outrageously expensive in the plastic versions, pricier in the metal version which still doesn't have enough heft for my liking. Currently mine is in the same plein air kit as the OLEeNU Shield in case I ever want a really thin line.

If you look into mechanical pencils, you'll hear a lot about the Uni Kurutoga, which has a big range of models. They're all worthless for an artist because they don't have sliding sleeves around the lead, except for a single cheapish model called the Uni Kurutoga Advance, which you can get in 0.5mm and -- I mention this because you want a very fine line -- the 0.3mm version I have, which is kept as the thin pencil in a book of graphite mechanical pencils in my studio that goes up to 5.6mm. The Kurutoga is distinguished by a mechanism that rotates the lead, with the effect that the line is kept to a constant thickness, which in turn makes it look thinner than it actually is.

Pilot Automac, only in 0.5mm, a famously sophisticated pencil in which you never need to advance the lead because it does it for you, a superb artist's pencil, beautifully made but unfortunately the most expensive of the pencils I compared; mine on a sale cost about 25 smackers delivered from Japan. I use this pencil every day. It's in the loop of my diary on my desk and I write with it, draw with, sketch with it, etc. No competition, though Pentel has a model of the Orenz, called the Nero, which apparently also offer auto-advance of the lead; it is even more expensive than the Automat; I just didn't see the point of splashing out for it when I already have an Automat, which has the right heft and weigh of line for much of what I do.

I've had my eyes on the platinum carbon for a while, though I'll probably end up choosing a dip pen, as I'm attracted by the ability to switch colors at will.

About the mechanical pencils, you saved me here... I was waiting to finish the 0.5 leads I have around at home, then buy the Kurutuga at 0.3mm, but now I'll look into the other options.
Top

Andre Jute wrote: ↑
Sat Oct 05, 2019 10:40 am
D'you know that Russ makes his sketches in pencil, combines and arranges several sketches into one at home, and only then inks with his brush, presumably under good light at a firmly planted desk or table.